My Aunt told me the other day that she wants to study magic. After giving her a reading list as long as her arm, I realized that we needed to back up a little–all the books and essays in the world won’t do her any good if she doesn’t know, first-hand, what that energy feels like. So I sat her down and taught her a simple exercise, and within minutes she had a handful of magic energy balls that she could sense with her own physical hands.

She got it on the first try, and I bet you can, too.

Think about every spell you’ve ever read. You call up the energy, and you send it out to do its job. But what is energy, and where does it come from?

Energy defines the ability of a force to do work, i.e., to make a change in a system. We know that all the things in the world are made of atoms, and we know that atoms are made of energy. That means that you–your body–is a dense mass of energy.

“Atomic orbitals of the electron in a hydrogen atom at different energy levels. The probability of finding the electron is given by the color, as shown in the key at upper right.” — Wikipedia

Electrons “orbit” atoms in their shells. It’s not like planets orbiting a sun, despite all those diagrams from your middle school science textbook. The orbital shell is merely a set of coordinates where the electron is most likely to be found when someone goes looking for them. They could actually be anywhere, at any given moment. Although your body maintains its physical shape from one instant to the next, many of the countless electrons in your physical atoms are likely to be somewhere outside of what you consider your physical boundary.

Just like you can use your conscious mind to direct the atoms in your arms and legs to move around and do things, you can control the force and energy of these auric electrons, as well. Conscious direction of that energy is the essence of a magical spell. That’s it. All the costumes and props and other trappings of all the different magical traditions are just tools that we use to help us get into the head-space where we can efficiently generate and apply that energy.

Conjure Your Own Magic Energy Balls

Have a seat. Close your eyes and take a few deep breaths. I like to rub my hands together before I start; I don’t know if that actually sloughs electrons from my body to my aura or if it’s just a little ritual that helps me focus, but that’s what I do.

Now hold your hands out as if you’re cupping a basketball. Imagine energy flowing from your dominant hand, striking your other hand, and getting caught in the space between them. You can visualize the flow any way you like; if you have a specific purpose in mind it may help to give it the corresponding colors and special effects (for example, when casting a healing spell, I see it as light blue with white lightning streaks).

As the energy fills that space, it will start pushing the boundaries. Let your hands drift farther apart to contain it as it continues to gush out, and when you’re ready, turn off the tap.

Your hands may already feel kind of weird, as if they’re coated with heavy air. The next step is really cool.

You know how it feels when you hold a big, full water balloon? You know how if you push on one side with one hand, your other hand will register that force? Try that. Hold that energy ball out in front of you, keep one hand still, and gently push one side of it in with the other hand.

Did you feel it?

I bet you did.

There. That’s magic, and now you know how to conjure magic energy balls. You didn’t have to imagine how it was affecting the physical world; you felt it, with your own skin and muscles. (My Aunt did this exercise a few times during the day, and by that evening, she was tossing energy balls back and forth between her hands.)

Make It Do Something

So what do you do with this…thing? If you’re just manipulating energy as an exercise, draw it back into yourself when you’re done. (I stick my face into it and suck it back into my lungs; you do it your way.) Of course, if you’re generating magic energy balls for a spell, you’ll want to send it on its way to do its job. How you do that depends on the intent of the spell and your personal style. You probably shouldn’t just leave it floating around, though. That’s a piece of you. Take care of it.

If you can create and manipulate energy balls, you’ve got the basics down for every spell you’ll ever cast.

In later articles I’ll talk about the implications of the idea that we’re all really just conscious energy globs with no physical boundaries, and why it’s so important to know what’s happening to your auric field when you’re interacting with other conscious energy globs…but for now, just play with your balls. 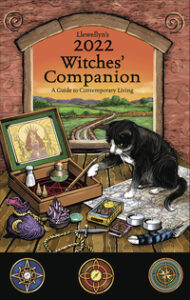 Hey, want to know more about how physics and magic are connected (and why your win-the-lotto spells aren’t working)? I wrote a whole article about it in Llewellyn’s 2022 Witches’ Companion. Check it out.

Be the first to comment on "Feel the Magic (Really): Create Energy Balls"